27. Juli 2014 Pia The alarm sounds at 5am. I force my eyes to open and see that nobody except for Pascale is moving, so I retreat back into my sleeping bag. Pictures of last night’s starry sky dance in my head, I think that I have to say goodbye to the Toba Valley today and a fall into a melancholic mood. The two clear rivers, the mystical forest, our sand bank and rescue islands have become a second home to me these past few weeks. I love the stillness of nature, the timelessness and especially the variety. In the past weeks I have learned and seen so much that I can’t even remember everything and there are still so many things that I’d like to do before I leave this place and say “Auf Wiedersehen!” Today at least I hope to check the box: “Observe and enjoy nature early in the morning” because we will be paddling 20 kilometers down the Toba to the ocean. Our tour begins after a quick and early breakfast. One last time we gaze at the sandbank and Cape Hope before eight of us go into the dark forest. The others break down and clean up the camp, cover our tracks as best as possible, and then leave the Toba Valley by helicopter. They will wait for us later at the Inlet, the river mouth at Campbell River. It is the active time for mammals such as the grizzly, which is why we walk through the forest singing loudly and shouting (“Hey Bear!”). We pass the huge tree with the wolf lair and the maple tree with the licorice fern, then the woods open up into a clearing which gives us a breathtaking view of our first sandbank and Rescue Island. The sun’s first rays of the day shine through the cloudless sky and meet the river flowing through the fog and give it a magical aura. This is how Rescue Island will remain in my memory, as I take one last look before we get into the rubber dinghy and disappear around the bend in the river. It is quiet, I hear only the rushing of the river and a few birds chirping. We let ourselves drift, and breathe in the stillness of the surroundings, and watch how the fog slowly lifts from the water, we see a few bald eagles – a young one and an old one – flying next to each other. Along the river bank there are ancient giant trees which are covered in beard lichen, waterfalls crash into the deep with breathtaking speed from the snow-covered peaks. It all seems so harmonic and peaceful. But after the fog lifts from the river and we have come closer to the inlet, we hear the sounds of a logging road that is quite close to the river bank. Through the trees we can see a large truck and electric cables, later we see an area that has been clear cut on the right side. Welcome back to civilization! I think it is sad that the river flows in just one direction, and we can’t turn around to the protected areas of wilderness that we passed just a few hours ago. As Bob, the helicopter pilot, flies overhead and waves to us, we start to paddle, so that we reach the Inlet in time (we almost make it – they are waiting for us already). From the river mouth we go back to Campbell River with a water taxi in order to catch a bus that will take us to the ferry at Nanaimo, which will take us on to Vancouver. I think there isn’t a mode of transport that we have not yet used today. The boat ride to Campbell River is great: we are very close to a huge waterfall and watch as a bunch of seals sun themselves on a large rock in the ocean. The look at us sleepily. I am also tired, so I try to catch up on my sleep on the boat and the bus back to Nanaimo, in order to gain some strength to carry what feels like a thousand bags. We actually do manage to get all of our luggage on to and off the ferry in one go, but everyone looks at us and laughs, even Charlotte, who picks us up in Vancouver, to show us the way to the youth hostel. It’s great to see her again! We are standing at the bus stop and talk about the adventures of the past few days, especially the flood. As our bus leaves, it is half-full with us and our stuff, with the rest of the space for other passengers. It seems weird to me to be once again surrounded by so many strangers, even though we meet a lot of very nice people. One Dutchman (“Let’s not talk about soccer”), a musician, and a German woman who started on a trip around the world a few months ago. It is fascinating to see how many people one can meet on a one-hour bus ride. Getting off the bus is fun, too. We have to get all of the luggage off the bus as fast as possible without injuring other passengers. We form a line to the outside and throw bag after bag onto the sidewalk and are observed by some passers-by – two of them even film us. As we arrive at the youth hostel, we are all terribly exhausted and hungry. Charlotte has the great idea of ordering pizza and we all go and sit on the beach where one can see the skyline of Vancouver. It’s very pretty here, under the trees and the night sky, even if the giant cedars are only small and the stars do not shine very brightly compared to the Toba Valley – that I am missing already (even though I am looking forward to a soft bed and a warm shower). Translated by Pilar Wolfsteller Photos: © Wilderness International 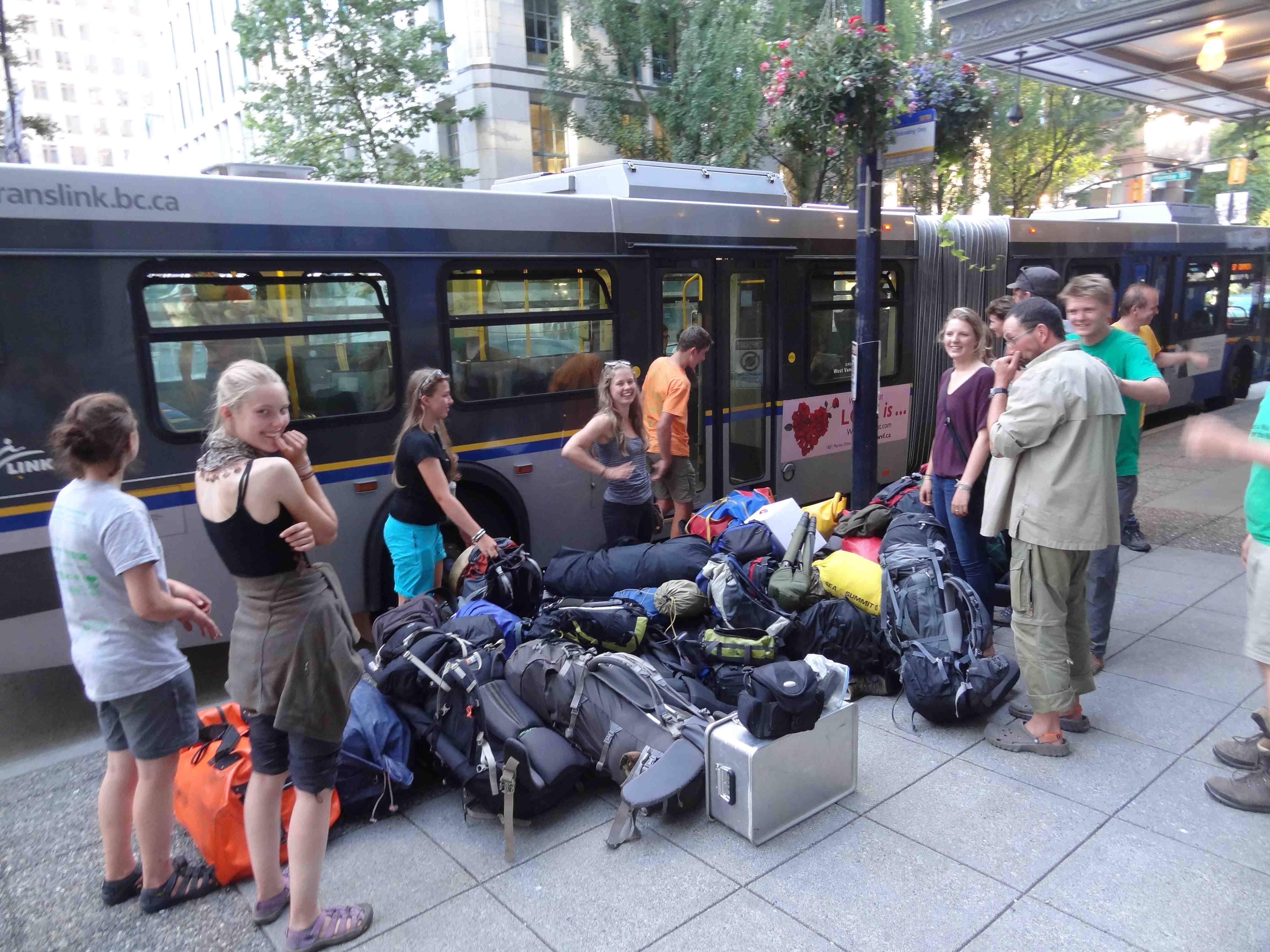 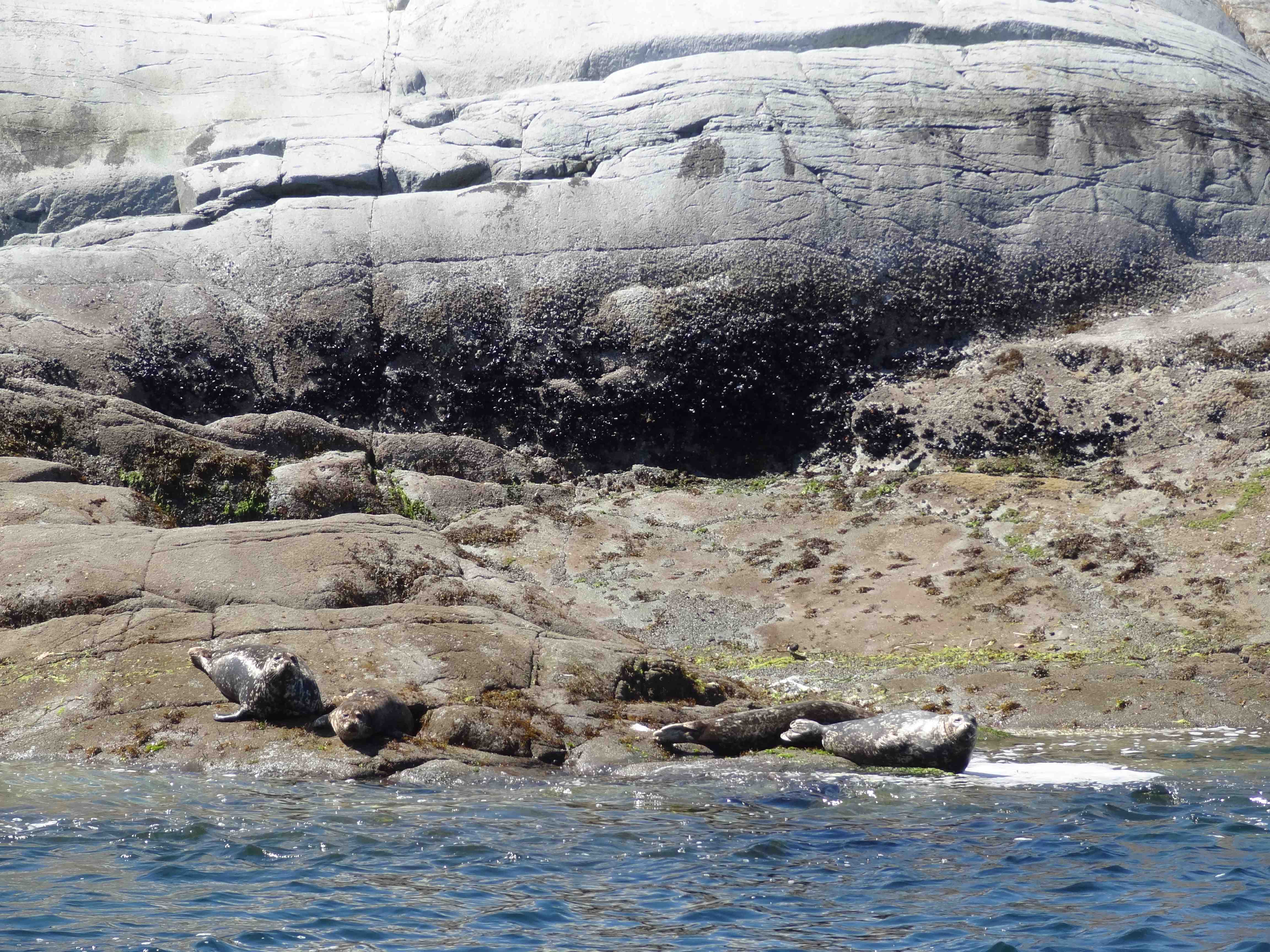 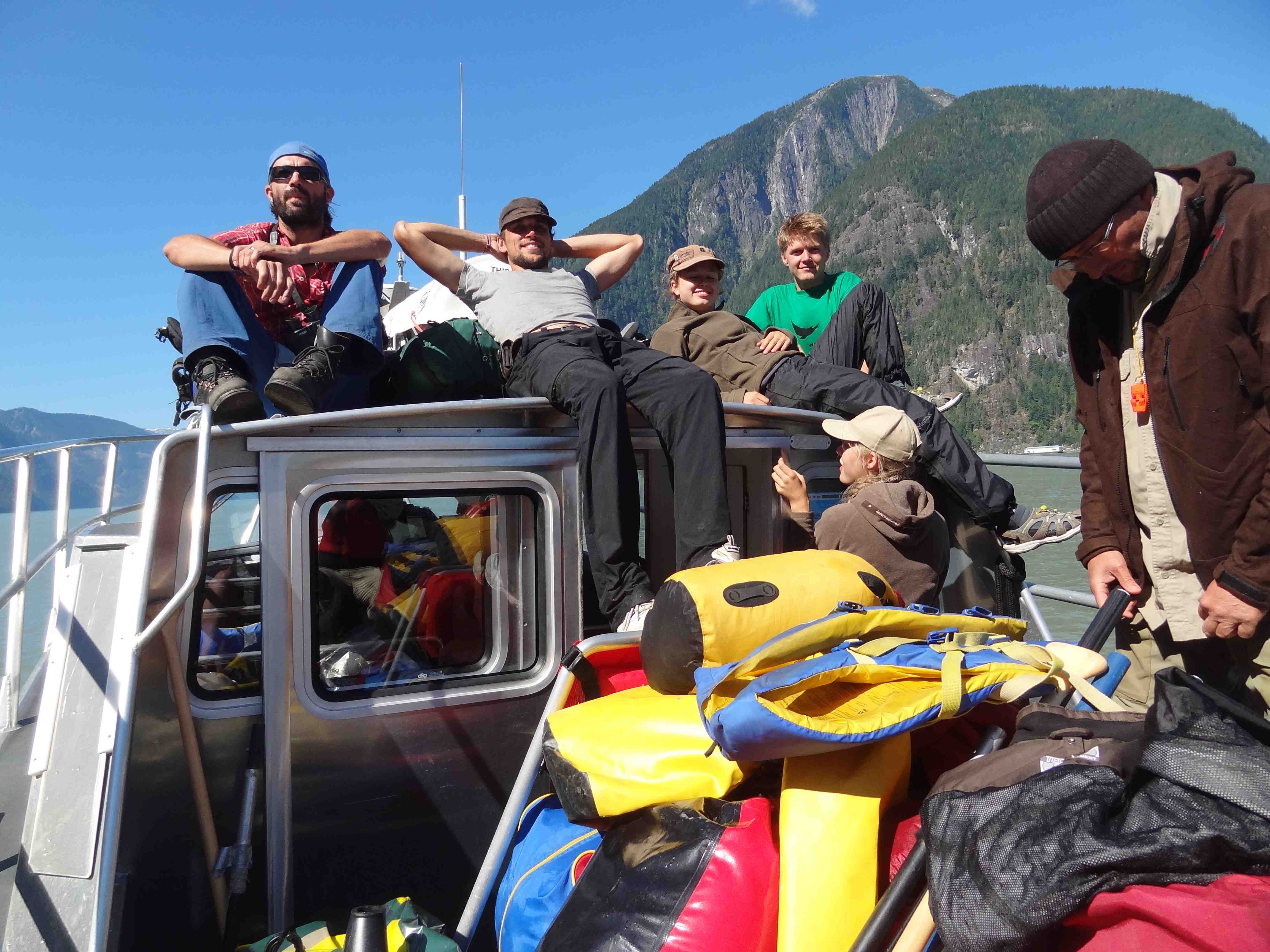 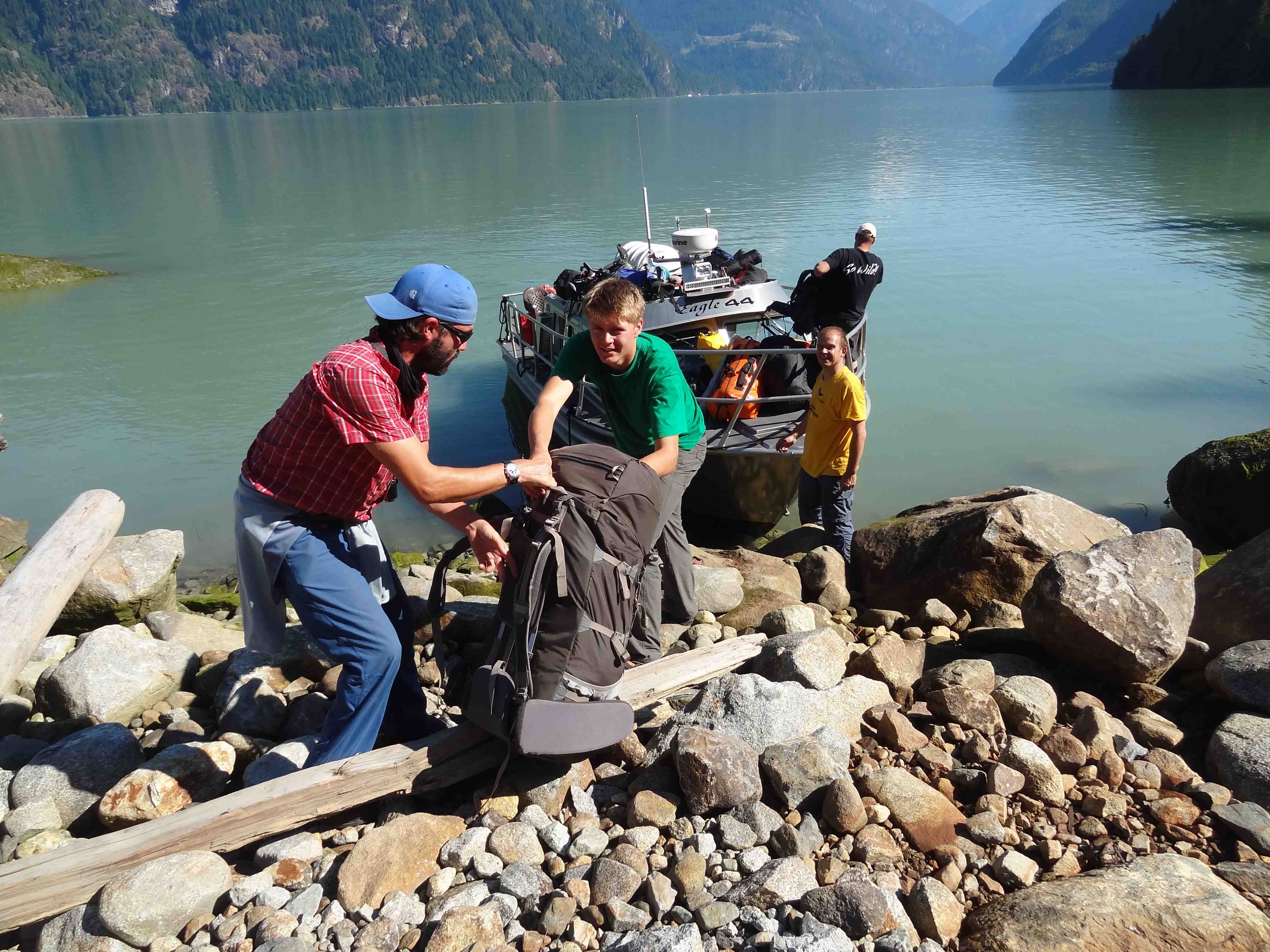 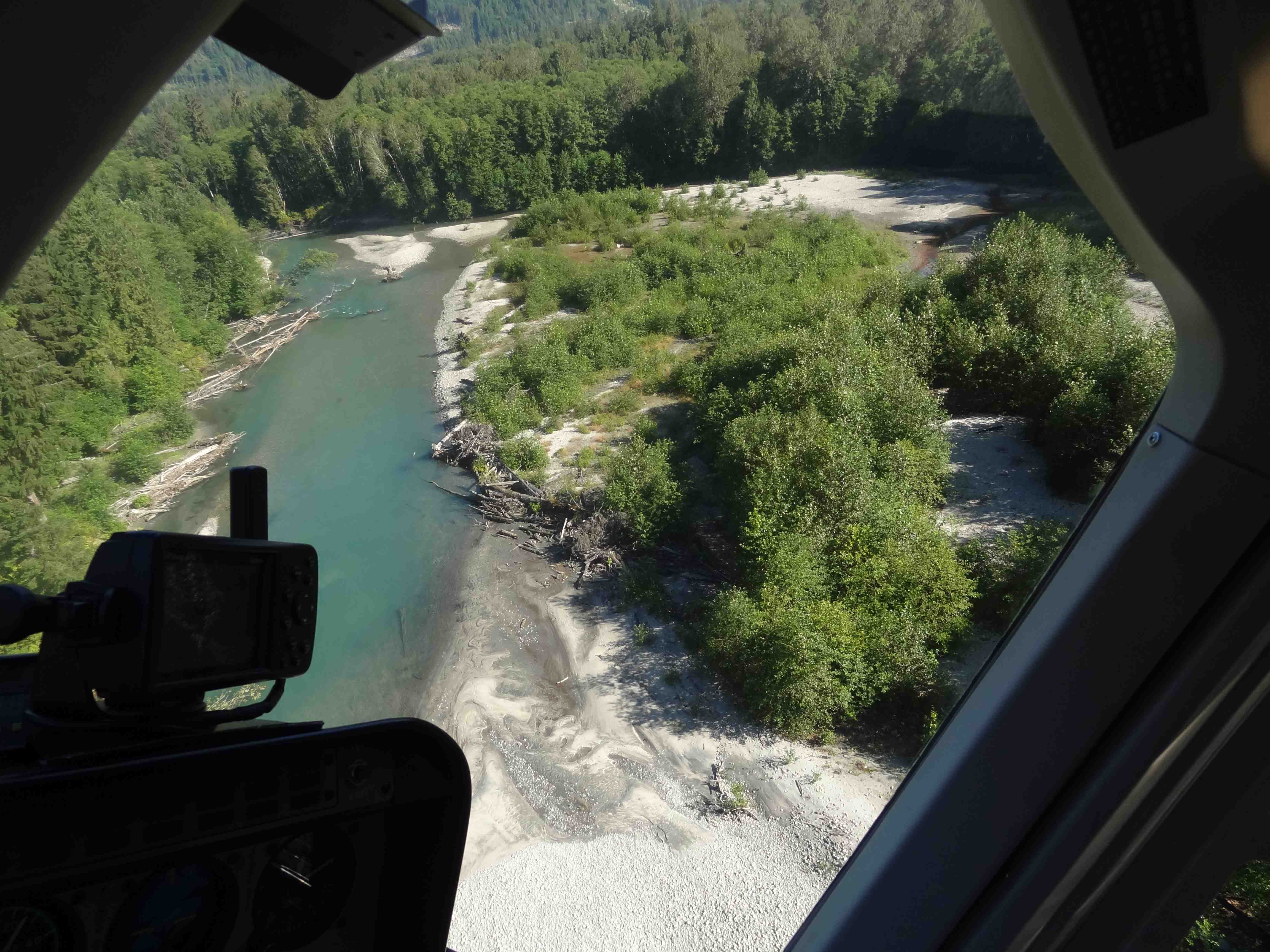