24. Juli 2011 After a night full of dreams, for the last time, Hiemtum, woke us up with his whistle and drum and even the sun came out to say Goodbye to us. Oh, on this wonderful island I have could easily stayed for a couple of more days, but time is running out … So after our last wild breakfast, we tried to be as fast as possible to get off the island, but like always it took a lot of work and time to clean the place to leave it as we found it. Before we left, each of us took a quite moment (a spirit break) to say goodbye and thank you to nature. And then once in the canoes, with a circle, we gave tribute to honor the island together, for all that it gave us. A wild ride was waiting us! Against the tide and against the wind we really had to fight to get the canoes along in the head wind. We headed down through the Deer group, through Robbers Pass and into Bamfield. We fought each stroke as the wind battered us and the surf pounded against the canoes spraying all with the salt spray. But when we arrived, we had earned the reprieve of the sheltered harbour where we were to be picked up. got picked But it took us ages. We had a nice stop on the way by a fishing boat and we were given 3 salmon which we handed over later to the bus driver as at thank you. Our two canoes went separate ways and in the end we found each other, of course. Even the Canadian Coast Guard, sent out by the first canoe, which was miles away in front of us (‘cause of much more strong men) guided us finally to the safety of the Harbour at Bamfield. Our Canoe was a bit less powerful, as we had two sea sick people on board. But we made it! After bringing all the gear to the bus and loading the Canoes on the trailer and almost leaving Matt behind accidently of course? – everybody got a nice special position to sleep on the bus. We traveled for hours a dirt road and for myself I enjoyed the company of my neighbor to talk along about old friends- Last but not least- one the way back home to Duncan, Uta got her first sighting of a Black Baer along the road. Back in Duncan at the youth center we just dropped of all the gear and went home for a nice hot shower and fell fast asleep. I enjoyed it so much! Dörte und Keith 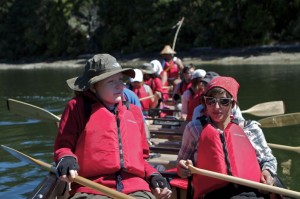